It’s a sign of the times that internet forums can have just as much influence over a stock’s growth trajectory as white-shoe investment firms. And Reddit traders continue to talk about the growth potential of marijuana stocks.

Among the cannabis companies that still get love from Redditors, Curaleaf (OTC:CURLF), Sundial Growers (NASDAQ:SNDL), and Tilray (NASDAQ:TLRY) stand out because of the volume of commentary they generate. The stock trading frenzy of January and February may have subsided, but these three pot stocks still command a lot of investor support.

A cure for the pot stock blues

Eric Volkman (Curaleaf): One weedie that has made the list of most-mentioned Reddit stocks is Massachusetts-based multi-state operator Curaleaf. It’s clear why folks on both general-interest stock market subreddits and those devoted to marijuana stocks are keeping a sharper eye on the company lately.

First, the company is based in — and has nearly all of its operations in — the U.S., which if all goes well should bloom into the world’s most important and lucrative market for licensed marijuana. The only other significant pot market, Canada, is fully legal but it’s relatively small, hotly competitive, and burdened by significant challenges (a strong black market, oversupply, etc.).

Second, as a near-pure U.S. operator and a relatively big one at that, Curaleaf stands to benefit very handsomely from legalization in this country.

While that’s moving in many fits and starts, at some point it will be the rule rather than the exception in our states — there is too much support from the public for it not to happen.

Curaleaf has enough scale to where its fundamentals will shift dramatically if or when federal and state law becomes more pot-friendly. The company is active in 23 states, and in total it operates 109 dispensaries slinging both recreational and medical product. On the back end, Curaleaf also owns 23 cultivation sites and 30 processing facilities.

I should caution here that the company is a consistent money-loser, due in no small measure to its big appetite for acquisitions (in an attempt to build scale relatively quickly).

Net losses have been trimmed lately, though — in the company’s most recently reported quarter it posted a deficit of $7.2 million. That was a great improvement over the more than $17 million loss of the previous frame, and bettered the two quarters before that.

Meanwhile, Curaleaf keeps posting double-digit revenue growth on a quarter-over-quarter basis. In the second quarter its top line expanded by 20%, reflecting both an ever-growing footprint and organic growth in its strategic markets — like home base Massachusetts, where total marijuana sales recently hit the cumulative $2 billion mark less than three years after the recreational pot market was launched.

The marijuana industry as a whole has nowhere to go but up, even if much of that advance will come to us later rather than sooner. As a top name in the industry, well-diversified and busy Curaleaf is sure to benefit. 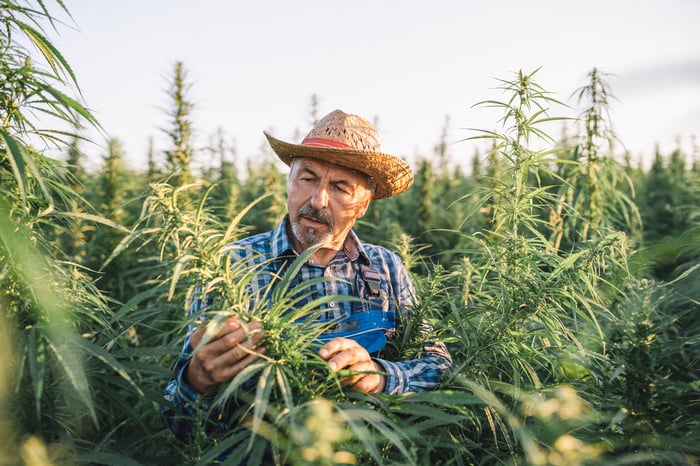 This penny stock is popular for a reason

Alex Carchidi (Sundial Growers): There’s more to Sundial Growers than what you’d expect with a typical cannabis business. Though it grows and sells marijuana, the company also has an investing wing it uses to gobble up stakes in smaller competitors, and that’s one of the things that makes it special.

Aside from frequently appearing in the top discussions in hotspots like the WallStreetBets subreddit, Sundial is also featured in a pair of subreddits devoted solely to talking about it, with the largest clocking in at around 63,800 subscribers. While Sundial may not be the pot stock that Redditors chat about the most by volume — that distinction goes to Tilray — it stands out because of the overwhelmingly positive sentiment that its fans on the site are prone to.

Even if some skepticism might be deserved (it’s a penny stock, after all), it’s hard to find any comments that are critical of the company’s prospects. Nonetheless, Redditors usually seem to prefer discussing the quality, profitability, and distribution of its marijuana products rather than one of its biggest strengths: investment income.

In the second quarter, Sundial made $5.7 million in net investment and fee revenue, and $3.7 million in profit equity from investees. That means it made more money from investing than it did from selling cannabis, which only brought in $9.2 million in the same period. So, it can succeed and grow on the basis of its investment income even if its branded marijuana products are unpopular with consumers or narrowly distributed.

And, management is keen to continue expanding its revenue-bearing investments to make use of the company’s cash hoard of around $1.3 billion. On Sept. 17, it invested $300,000 in purchasing shares of Valens GroWorks, a versatile cannabis company with operations in the U.S. and Canada which Sundial already owned 9.99% of.

If the preliminary discussion on Reddit is any indication, the purchase is yet another smart move by Sundial, and in this case, I can’t say that I disagree. 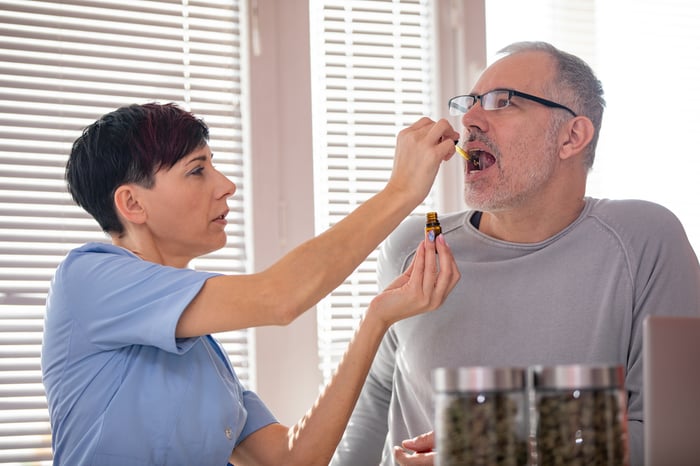 A cannabis stock worth the wait

Rich Duprey (Tilray): Despite continuing to receive support from the Reddit crowd, Tilray stock remains on a downward trend. While shares remain 45% higher than where they started the year, mostly a result of the meme stock trading frenzy in January and February, but also due to its acquisition of Aphria, the cannabis company has lost nearly half its value over the last six months.

Yet Reddit traders can’t stop talking about its potential, particularly after it acquired last month a significant stake in MedMen, a multi-state operator with 21 licenses and 25 retail locations including in Los Angeles, Boston, and Chicago. Their interest in Tilray isn’t misplaced.

After the Aphria merger, Tilray is the biggest marijuana producer in Canada by revenue and its market cap of $5.3 billion puts it just behind Canopy Growth at $5.5 billion as the largest cannabis stock by market value.

Tilray also has a global reach few others can hope to match with its hand in recreational, medical, and pharmaceutical distribution. While each segment is currently walled off largely by specific geographies — recreational marijuana is in Canada, medical marijuana is largely in Europe and Australia, and the pharma operations are in Germany — the intent is to eventually have them overlap everywhere.

While it has a U.S. presence of sorts through its joint venture with Anheuser-Busch InBev and Aphria’s previous acquisition of Stillwater Brewing, the MedMen investment gives Tilray entry into some of the most important marijuana markets, including California and Florida. But that won’t happen until legalization occurs at the federal level, and though there seems to be a consensus forming that it will happen sooner rather than later, it’s nowhere near a done deal.

Still, MedMen sales are growing, up 55% in the second quarter, and it significantly narrowed its losses, reporting a $41.7 million operating loss for the period, much smaller than the $279 million loss a year ago.

Tilray itself is growing, too, with revenue 27% higher and adjusted EBITDA of $12.3 million. It suggests the marijuana stock is still worthy of the buzz it generates in internet chat rooms and elsewhere, but may require patience for it to realize its full potential.

12 Cannabis Stocks in the Red and Still Making Headlines

Best Cbd For Stress Near Me

Best Cbd For Stress Near Me