3 Cannabis Stocks That Could Easily Double By 2023

Marijuana might be a massive growth opportunity, but many companies in the industry have done little to indicate they’re ready to roll. Some of the problems cannabis players have faced have been due to regulatory impediments, but it’s also true that early investors in this sector were often placing bets on businesses based on little more than a good story.

That said, the cannabis market has matured a lot since its fumbling beginnings, and now, there are a bunch of pot stocks doing the real groundwork for growth. Columbia Care (OTC:CCHWF), MariMed (OTC:MRMD), and Planet 13 Holdings (OTC:PLNH.F) are three marijuana businesses that could very well double in value within the next two years.

An inexpensive operator with a smart growth strategy

Eric Volkman (Columbia Care): Wall Street isn’t showing much love to pot stocks in general right now, but there’s one segment of the industry that traders appear relatively upbeat about — cannabis retailers that are fully or mainly engaged in the U.S. market. Even after the recent slump in pot stocks, many of these operators still trade at double-digit prices. A rare exception is Columbia Care, trading for  less than $4 per share. But this New York-based multistate operator is realizing some big ambitions.

The company is active in 14 markets, with exactly half of those being states that have legalized marijuana for both recreational and medical use. It particularly likes to target limited-license states; this gives it an advantage since competition in such locales is limited to a handful of operators.

Columbia Care is growing fast. In Q2, the company enjoyed double-digit percentage revenue improvement on merely a quarter-over-quarter basis — not only from established marijuana markets such as Massachusetts (up 85% thanks largely to wholesale weed sales), but also from recent legalizers. The company’s take in Arizona rose 23%, for example, while its sales in New Jersey saw a 20% pop.

Three states where Columbia Care has operations (New York, New Jersey, and Arizona) flipped the legalization switch on the higher-potential recreational marijuana category this year. Now consider that those are the fourth-, eleventh-, and fourteenth-most-populous U.S. states, respectively, and it becomes clear how large the company’s opportunities for growth are.

Columbia Care is also active in large-population states that haven’t yet sanctioned the sale and consumption of cannabis for recreational purposes, but that are likely to soon. At the top of that list are Pennsylvania (sixth-largest population) and Ohio (seventh-largest population), where the company has two and three dispensaries, respectively.

That may not sound like much, but firstly, these are toeholds in potentially very busy markets. Secondly, Pennsylvania is one of those limited-license states. Columbia Care managed to grow its revenue there by 18% sequentially in Q2; imagine the kind of numbers it could post if and when the state green-lights recreational weed (or if de facto legalization occurs at the federal level).

Finally, I’m encouraged that Columbia Care is always seeking to streamline and innovate its retail offerings, as retail will be the front line as we lurch closer to 100% legalization in the U.S. The company’s Forage online “cannabis discovery tool” guides consumers to the right products for their needs, while the company’s branded credit card is an intriguing dip into the financial services business.

I should add a big caveat here: Columbia Care, like most marijuana companies, is consistently unprofitable. That might change soon, though. As a retail-focused pot business, the company is in the right segment at the right time, and its top line continues to expand nicely. This high-potential stock is a fine buy at its current modest price. 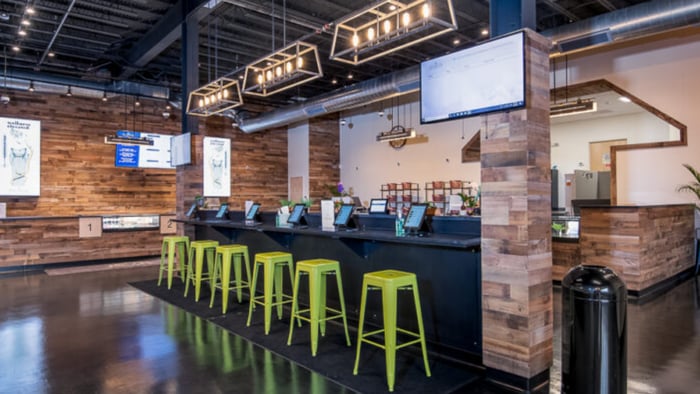 This penny stock is on a roll

Alex Carchidi (MariMed): MariMed is an exciting cannabis pure-play that has somehow remained under the radar despite its blistering growth of 636% in the last five years. MariMed is a penny stock thanks to its share price of less than $1, so investors shouldn’t expect its price to be the stablest on the market. But you shouldn’t count it out, because it’s likely to keep sizzling through 2023.

MariMed is profitable, and it’s also continuing its streak of growing rapidly. In 2020, its earnings and revenue more than doubled, and its stock price is up more than 488% in the last 12 months. In Q2, its revenue increased by a white-hot 238.9% year over year, driven by strong patronage at its small collection of stores.

Right now, the company has seven dispensaries spread across five states, including the lucrative cannabis markets of Massachusetts and Illinois. It’s in the process of opening three new dispensaries while upgrading several of its existing locations, which could result in significant improvements to its top line over the next couple of years.

Per management’s estimates, the new revenue from these initiatives could be as much as $210 million, which would dwarf the company’s trailing-12-month revenue of $91.03 million. Given that MariMed currently trades at a price-to-sales multiple of 4.2, if it made around $210 million in revenue and kept a similar valuation ratio, it would have a market cap of $882 million — more than double its current market cap of nearly $326 million.

So MariMed is on the fast track to doubling, and investors should consider it for a purchase. 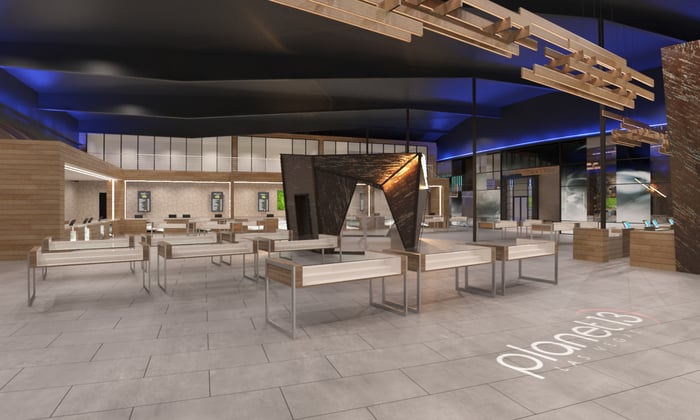 From humble beginnings, a massive opportunity

Rich Duprey (Planet 13 Holdings): What sets Planet 13 Holdings apart from other cannabis dispensaries is the very focused nature of its operations. Where some multistate operators are seeking to grow by leaps and bounds to build a critical mass, Planet 13 is targeting the consumer experience in a very narrow way with just three locations.

That may sound almost too narrow, making it more of a niche player than a mainstream operator, but it’s a methodical process that could become consumers’ preferred way to purchase marijuana.

Experiential retail is redefining the broader retail industry because the static nature of simply selling merchandise is cold and unnatural. Companies that allow the consumer to immerse themselves in the experience of buying are changing how people shop.

Planet 13 notes that 74% of people prefer experiences over products, and its two complexes provide a unique environment for purchasing marijuana. Its Las Vegas venue had more than 1 million visitors in 2019 (before the pandemic shut everything down) and last year still represented over 9% of all cannabis sales in Nevada, generating over $70 million. It features a cafe, a processing center, an events stage, and a retail space where customers can buy dried cannabis, paraphernalia, and derivatives.

Its recently opened superstore in Orange County, California — near Disneyland, Knott’s Berry Farm, and some of the state’s best beaches — looks to replicate that success in a 55,000-square-foot facility. It also operates a smaller neighborhood retail concept called Medizin that could become its blueprint to spread out across the country and grow both sales and profits. Compared to Planet 13’s superstores, Medizin generates a higher percentage of its sales from the company’s higher-margin in-house brands.

As noted, Planet 13 has three retail locations and four licenses in two states, but it’s looking to obtain one or two more licenses in key markets to open superstores in (it was recently awarded one in Chicago) while placing additional neighborhood stores in other attractive ancillary markets. Within five years, its goal is to have at least eight superstores and nearly two dozen smaller locations.

Starting from such a small base, it won’t take all that much business growth to ramp up its stock price. At around $4.50 per share, Planet 13 Holdings could reasonably double in value in just a few year’s time without much effort, but if it hits some or all of its goals, it could really supercharge its share price growth.