Many of the big cannabis companies that operate in Canada, where pot is legal federally, trade on a major exchange such as the Toronto Stock Exchange (TSX), the NASDAQ, or the New York Stock Exchange. Plant-touching marijuana businesses in the U.S., however, don’t have that luxury due to the federal laws banning its sale and use domestically.

But former Canopy Growth ( CGC -3.57% ) CEO Bruce Linton believes that being listed on a major exchange could actually be a disadvantage for a marijuana company. And he thinks the Canadian companies should consider getting off of them.

A big opportunity for Canadian companies

The biggest reason for moving off the major exchanges and instead trading over the counter and on the Canadian Securities Exchange (CSE), where many U.S.-based pot producers trade, is that cannabis companies would then be able to operate in the U.S. market. This includes acquiring multistate marijuana businesses.

Currently, a company that tried to do that would run the risk of being delisted from the NYSE, NASDAQ, or TSX. In 2017, companies listed on the TSX with links to the U.S. cannabis market received warning letters from the exchange stating they could be removed from it. Aphria, which is now part of Tilray, was among the companies included, as, at the time, it owned a stake in Florida-based cannabis operator Liberty Health Sciences. Aphria would end up selling its stake in that company.

To get around these challenges, Canopy Growth has entered into multiple acquisition agreements that are conditional upon changes in U.S. law. It has a deal in place to acquire multistate operator Acreage Holdings as well as cannabis edibles maker Wana Brands. But until these transactions can legally go through, they’ll remain pending.

Is the Canadian Securities Exchange the solution?

In a recent interview with BNN Bloomberg, Linton suggested that Canadian cannabis companies should exit the major exchanges so that their businesses can expand south of the border. And he predicts that the first big company to make the move to the CSE so it can pursue opportunities in the U.S. will see its stock “rip” afterward.

There’s no doubt that expanding into the U.S. market could significantly accelerate a cannabis company’s revenue growth. Curaleaf Holdings is an industry leader and it has generated more than $1.1 billion in revenue over the past 12 months — that’s well more than double the 569 million Canadian dollars that Canopy Growth has brought in over the same period.

The one downside is that investors may pay less for shares of companies that aren’t traded on a major exchange. Part of the allure of the NASDAQ and NYSE is that they attract much larger pools of investors compared to the CSE or over-the-counter exchanges. And that leads to higher premiums for the pot stocks that trade on them. 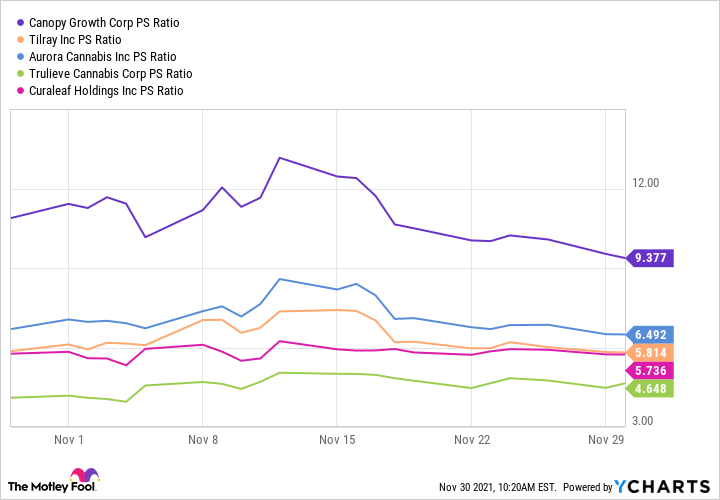 Even though Canopy Growth may not have the same opportunities that Curaleaf has access to today, it trades at a much higher multiple of revenue. Aurora Cannabis, a smaller producer that has many of the same problems Canopy Growth has, still trades at more of a premium than either Curaleaf or Trulieve Cannabis. So while expanding into the U.S. would lead to significantly more sales for a company, its stock price rise could be limited if traders value that company at a lower revenue multiple.

What should investors do?

Linton’s advice is sound in that the best opportunities in cannabis right now are in the U.S. market. In Canada, there’s plenty of competition and companies are fighting hard for market share, which can make it difficult for them to keep their prices high enough to turn a profit.

That’s why I wouldn’t invest in a Canadian-based cannabis business right now; the better option is to hold shares of an MSO and just wait. While the stocks may trade at a lower premium, once federal legalization occurs (assuming it does) and those companies can list on a major exchange, that will change. The key is being able to wait for that to happen, as it could be years before Congress acts to make marijuana fully legal in the U.S.

This article represents the opinion of the writer, who may disagree with the “official” recommendation position of a Motley Fool premium advisory service. We’re motley! Questioning an investing thesis – even one of our own – helps us all think critically about investing and make decisions that help us become smarter, happier, and richer.

What are some of the uses for CBD oil?

Should You Invest in Cannabis Stocks in 2022?

2 Dirt-Cheap Cannabis Stocks That Could Soar in 2022