Columbia Care (OTC:CCHWF), Ascend Wellness Holdings (OTC:AAWH) and Village Farms International (NASDAQ:VFF) all have had double-digit revenue growth so far this year. Still, all three cannabis companies, all of whom have market caps around or below $1 billion, are flying under the radar, with their shares languishing this year.

It has been a rough year for cannabis stocks. The Cannabis ETF, for example, is down more than 44% for the year. The excitement over the opening of cannabis sales in several states has dulled, as the pace of new cannabis legislation at the federal and state level has been sluggish.

Here’s why I think these three overlooked stocks have great potential in 2022.

Columbia Care is in a good spot

Columbia Care is on pace for a record revenue year, but you wouldn’t know it from where the stock is at, down more than 48% for the year.

The other big deal for Columbia Care is it is in a good position to benefit when several Northeastern states open to recreational sales, particularly New York, New Jersey, and Virginia.

Columbia Care has 79 retail outlets, with 20 more in development. New York is expected to open up to recreational sales sometime next fall, and the state has the potential to be a $5 billion cannabis market, the company said.

Columbia Care opened the first medical marijuana dispensary in New York and already has eight medical retail locations in the state, four of which are active, in addition to two large production facilities in Rochester and Riverhead.

Ascend Wellness is also counting on the Northeast

Ascend Wellness just went public last spring and has seen its shares tumble more than 36% this year. Like Columbia Care, Ascend isn’t profitable yet but shows an improved balance sheet.

In the third quarter, the marijuana company reported revenue of $94.4 million, up 128% year over year and 13.2% sequentially. It gave guidance for full-year revenue of $350 million, which would represent 130% growth over 2021. It also showed adjusted EBITDA of $23.5 million in the quarter, a 15.9% increase over the prior quarter.

It also has a deal in the works with MedMen (OTC:MMNFF) to acquire that company’s New York license, along with four retail locations and a cultivation license in the state.

A key for Ascend’s rise is it keeps adding to its growing facilities and expects to have 274,000 square feet of canopy by 2022, giving it the opportunity to reach its goal of having half of its revenue from wholesale sales.

Vancouver-based Village Farms International has seen its shares fall more than 25% so far this year. At $564.39 million, it is a little more than half the size of the two previously mentioned companies.

In the third quarter, the company reported sales of $72.4 million, representing 68% growth year over year and 3% sequentially. The company also turned a profit, albeit a small one, with earnings per share of $0.07, up 43% year over year. Through nine months, the company listed revenue of $195.2 million, up 59% over the same period last year.

What gives Village Farms a unique cushion is only part of its business is marijuana-related, with the rest of its revenue coming from its produce operations. The company’s produce division, which has greenhouses in Canada, Texas, and Mexico, was responsible for $41.2 million in revenue in the quarter.

However, the company’s marijuana subsidiary, Pure Sunfarms, plus another recently added cannabis-related company, Balanced Health Botanicals, have been the impetus for the company’s growth. Pure Farms has had 12 consecutive quarters of positive adjusted EBITDA. In the third quarter, the subsidiary’s revenue was reported as $27.4 million, up 53% year over year and 13% sequentially. When you add in Balanced Health’s revenue from hemp-derived CBD brands, Village Farms had $31.2 million in cannabis revenue in the quarter.

Village Farms International has 5.7 million square feet of greenhouse production space in Texas. That being aid, if that state further expands its tight medical marijuana regulations and opens up to adult-use cannabis sales, the company will be a great position to benefit. One 2020 report put the cannabis sales potential for the nation’s second-largest state at $2.7 billion annually. 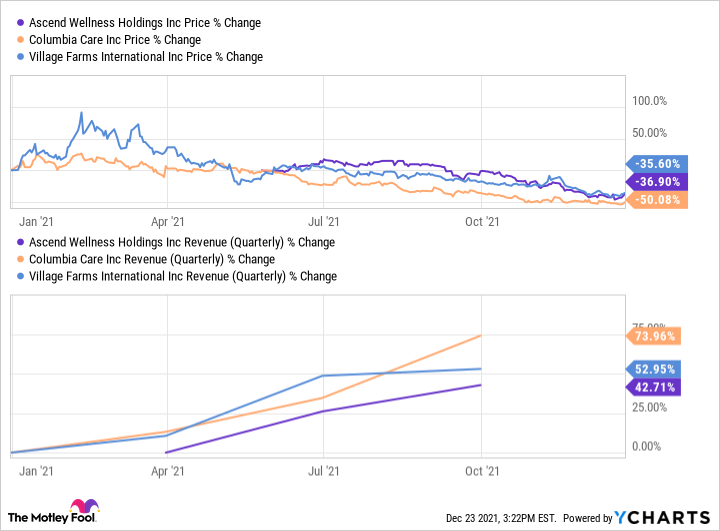 Investing in a cannabis stock has to be a long-term move, because the industry is still in its infancy. But if you’re looking at potential, all three of these companies appear to be strong plays. Their share prices are down, but they continue to deliver strong revenue growth.

Of the three, I like Columbia Care and Village Farms International the most, but for different reasons.

Columbia Care will be in the right spot when New York and neighboring New Jersey opens up next year to adult-use sales. It could easily double its revenue next year if everything falls right. Village Farms International’s potential will be more drawn out, but the company is already showing it can turn a profit, and whenever Texas opens to adult-use sales, the company can be a big player there as a wholesale and retail cannabis seller.

Ascend Wellness will also benefit as more Northeastern states open to adult-use sales, but its higher debt-to-equity level compared to the other two companies makes me a little wary about its ability to grow.

CBD UPDATE! GUMMIES & OINTMENT. THE SECRET TO MY STRESS RELIEF?!

CBD UPDATE! GUMMIES & OINTMENT. THE SECRET TO MY STRESS RELIEF?!